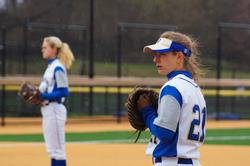 Hamilton College’s softball team has faced tough opponents throughout the month of April while being plagued by weather cancellations. After opening up conference play at the beginning of April against Amherst by dropping all three games against the Mammoths, the Continentals were eager to earn a win as the season continued.

Hamilton faced another NESCAC rival in the West Division, Williams College, in a 3-game weekend series. The April 8 game was dominated by hitting on both sides. Hamilton, down 9-3 after the fifth, rallied and tallied five runs, including two home runs by Kendall Searcy ’20, the first of her career, and Caitlin Berreitter ’20, her second of the season. Ashleah Yzaguirre ’19 also had two runs during the game. This pulled Hamilton ahead, but a late run by Williams in the bottom of the seventh forced an eighth inning. Williams ended up winning 11-10 in a game with 22 hits total, 7 of which were home runs.

The next day was a double header against Williams again, and the Continentals dropped both. Hamilton held a 6-0 lead for most of the first game, but the Ephs rallied to take the win with a score of 7-6. Williams outhit and outplayed Hamilton in the second game as well, where the Continentals were hindered by 3 fielding errors. Williams took the game 11-2, and Hamilton exited the weekend with a 0-6 conference record.

Hamilton took on Utica College two days later in a non-conference double-header. Both games featured dominance from one team, and each college took one game. Both games were also shortened due to the 8-run mercy rule. In the first, Utica had consistent hitting throughout the game and was up 9-1, so the game ended after the sixth inning. Hamilton came out for revenge in the second game and had 12 hits in their first two at-bats. After just five innings the Continentals were up 10-2, and the Pioneers went home with a loss in one of their two games.

The next weekend was another conference matchup, this time against the Middlebury College Panthers. In the April 14 game, Hamilton started strong with a double in their first at-bat from Daphne Assimakopoulos ’17. Middlebury had an explosive third inning to put themselves three runs above Hamilton. The Continentals rallied in the bottom of the fourth with a two-run home run from Phoebe Collins ’18, but the Panthers ultimately took the first game. The second game was a short and decisive 11-1, 5-inning victory for Middlebury. The third and last game was a nail-biter, and Hamilton climbed out of a 4-0 hole to win 6-4. Highlights were a career first home run from Sophia Cerreta ’20, and the strong pitching performance after the second inning. Following the four runs for the Panthers in the first two innings, Hamilton blanked Middlebury for the rest of the game with solid pitching from Ursula Castiblanco ’19, Molly Leitner ’19, and Desmen DePaulis ’19. The win was Hamilton softball’s first conference win of the season.

A doubleheader on April 18 against SUNY Oswego was cancelled, and so Hamilton faced Trinity College next on April 22 with yet another double-header. The first game was a short victory for the Bantams, who won 15-0 in 5 innings. They had 12 hits, and capitalized on two hit batters and six walks for a decisive victory. Hamilton, not to be denied, brought energy and enthusiasm into the second game of the day against Trinity. Hamilton had pairs of runs in the first, second and fifth innings, and Liz Brautigam ’19 played a role in the scoring in all three innings, either scoring a run or driving one in in each inning. The Continentals emerged with a 6-5 win, increasing their overall record to 10-20.

Hamilton’s doubleheader against Morrisville State on April 24 was also cancelled, but they play a doubleheader at Skidmore on April 26. Their next home games will be their last; the Continentals face division rivals Wesleyan University on April 28 at 5 p.m., and on April 29 at noon and 2 p.m. Both games will take place at Loop Road Softball/Baseball Complex at Hamilton College.