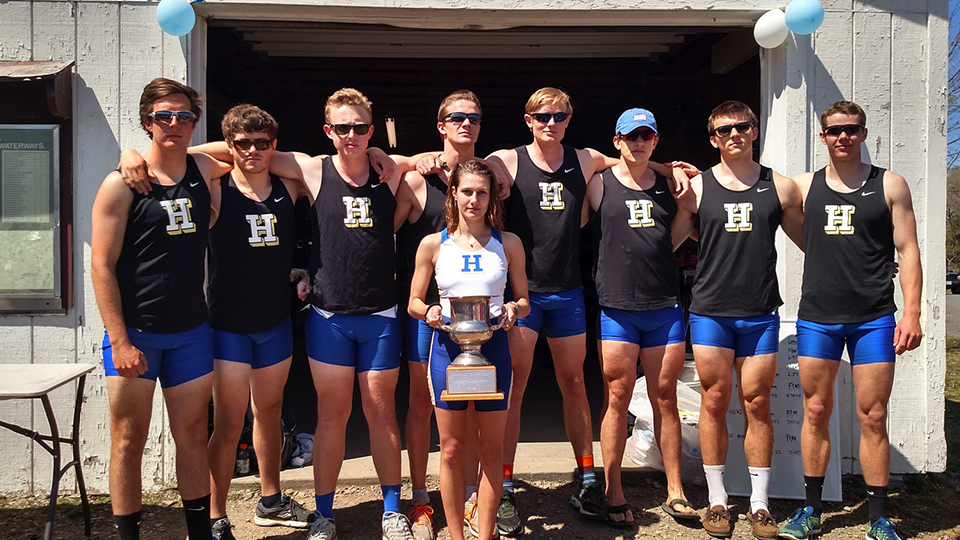 Rowing squads shine at first home regatta of the season

This past weekend, the Hamilton men’s and women’s rowing teams partook in their only home regatta of the season.  For both teams, the meet was a success. The men held on to the Gilman Cup, as all three boats won races against Union and Franklin & Marshall Colleges. The women, currently ranked 12th in Division III for the varsity eight boat, retained the Gilman Plate by defeating Union in the varsity eight.  Additionally, the second varsity eight secured the Gilman Goblet by defeating Union’s Dutchwomen; Franklin & Marshall’s crews edged out the Continental boats in both races.

Rowing for the men in the varsity eight were Parker Lewis ’16, Harrison Thomas ’18, Landon Morin ’16, Elias Clough ’17, Michael Burchesky ’17, Fletcher Sherrod ’18, Alec Melone ’16 and Oliver Magnusson ’17. The men’s varsity eight are coxed by Caroline Harrington ’16. Reflecting on the team’s recent success, Harrington said, “This past weekend was a great weekend for Hamilton rowing. It was great to sweep the Gilman races. Going into the race Sunday morning, our plan was to beat Union and Franklin and Marshall in the first 20 strokes. With this goal in mind, we were really motivated to walk away immediately, so off the start we felt the power and after the first 30-40 strokes, I knew we had it.”

Lewis highlighted the team’s resilience, noting that the team had been “battling bad rowing conditions and illnesses during the week leading up to the race,” but lauded his team’s ability to, “stay focused and get the job done.” Lewis expressed gratitude for the fans that came out to the Erie Canal in Rome: “Having many of our classmates, professors and parents at the race to cheer us on gives us some extra motivation to get through the finish line.”

Racing for the women in the varsity eight this past weekend were Samantha Benevelli ’18, Keara Lynn ’16, Maddy Maher ’18, Alexandra Brantl ’18, Danielle Schuman ’19, Rachel Cooley ’18, Ellie Pinto ’18 and Isabel Grieder ’18, with coxswain Heather Piekarz ’16. Lynn noted the obstacles that the team  has faced of late, which led to “some lineup changes before the race.” Lynn commented, “I am so impressed and proud of this group. It’s always nice to keep hardware at Hamilton, but I think the real victory here is the fact that both boats rowed solid races that add to our overall racing experience.” On the team’s progression this season, Lynn added, “We have come so far since our first race a month ago at the Murphy Cup. It’s been fun to see this team improve each week, both in practice and in races, and it’s extremely exciting to see everyone’s enthusiasm and hard work. All of these small changes are adding up and will put us in a great position for our championship races, as well as for next season and beyond.”

Lewis believes that the men’s team has progressed well, saying, “I think the younger guys have done a great job stepping up.” Harrington added, “Our success and progression has been a process and there has been a lot of good competition for seats. It’s really come down to communicating with each other about our goals and about how best to achieve them. As the coxswain, it’s my job to listen to what the rowers are saying and give positive feedback and criticism to help them improve every day we are out on the water.”

While the team has achieved success of late, improvement, as Harrington notes, is still the goal.  Lewis echoed her sentiment, claiming, “I feel like [the varsity eight] has much more room to get better. With quite a few experienced seniors in the boat, we hold ourselves to very high standards.” Lewis stresses that, in order to reach those standards, the team must “row aggressive and tough, while still keeping our technique sharp—which is a delicate balance.” Harrington, emphasizing the team-oriented nature of rowing and the importance of communication believes “It will be really important to keep improving on the water every day and working as a team…that comes from more communication and practice.”

Both the men and women are working hard to improve as the season reaches its final stretch. The teams travel to Ithaca this Saturday, April 23, to square off against Colgate and Marist in the last contest of the regular season. Both teams head to the New York State Championships in Saratoga Springs the following Saturday. The NESCAC Championships will then take place in Worcester, Massachusetts on May 8. With championship season fast approaching, it is crunch time for both the men and women. The next few weeks will be characterized by hard work, intense races and, hopefully, success.