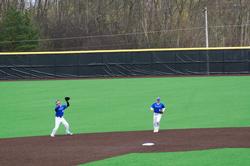 This past weekend the Continentals baseball team played a three game series against the Mammoths of Amherst College. Unfortunately, Hamilton dropped the series, winning only one of the games. However, there was a lot of good baseball played. Danny DePaoli ’18 reflected on the weekend’s games when he said, “The series this weekend definitely didn’t go according to plan. We showed good fight and played with a lot of heart on Friday, but couldn’t get it done on Saturday.”

Friday afternoon was the first NESCAC game on the brand new field, and the Continentals protected home turf in a thrilling fashion. Hamilton’s ace DePaoli got the start on the mound, and he did not disappoint, pitching a no-hitter until the fifth inning and striking out seven batters over 6.2 innings. The Continentals jumped out to an early lead by scoring one run in the second inning. Brett Mele ’17 got on base with a leadoff walk and moved to second when Jordan Northrup ’19 also walked. Mele advanced to third on a wild pitch before Dean Rosenberg ’18 hit a deep sacrifice fly to centerfield. Hamilton added two more runs in the fifth. Robert Morris ’17 started the inning with a triple and scored when Chris Collins ’17 singled up the middle. A couple batters later, Andrew Haser ’17 hit a double that allowed Ryan Wolfsberg ’17 to score. Amherst was able to score one run in the seventh and another in the eighth. The Continentals were up 3-2 going into the ninth inning. The Mammoths scored two runs to take a 4-3 lead going into the last half inning. With one out, Chris Collins reached first base, and his twin brother Kenny Collins ’17 followed that up with a single. The Collins brothers used their speed to pull off a double steal. With the tying run on third and the winning run on second, Amherst intentionally walked Wolfsberg. Chris Collins scored the tying run on a wild pitch. Amherst responded by walking Haser, which gave Mele the chance to win the game. He did just that, punching a single through the right side of the infield. Kenny Collins scored from third to win the game. It was a thrilling way to start the series. Head Coach Tim Byrnes reflected on the game by saying, “[The] comeback walk-off win was a great feeling, and I was really happy for Brett Mele getting the game winning hit and giving our team that chance to keep fighting on Saturday.” The two teams played a doubleheader on Saturday.

The Continentals were held to just four hits and two runs in the first game of the day. Amherst’s Jackson Volle had a superb day on the mound. He pitched the complete game and only faced 28 batters over seven full innings. Max Jones ’18 pitched six innings for Hamilton, allowing seven runs. Only three of the seven were earned, however. Brett Sandford ’19 pitched a perfect seventh inning, getting all three batters he faced out. Amherst scored four runs in the top of the second. In the bottom of the third, the Continentals got one run back. Rosenberg capitalized on Amherst’s only error of the game, scoring when Volle threw the ball away on an attempted pickoff. In the sixth, the Mammoths scored three more to add on to their lead. Hamilton fought back in the bottom half of the inning. Northrup drove in Haser on a productive groundball. Unfortunately, the scored held during the seventh inning, and the final was 7-2. The win was Volle’s fifth in just as many starts.

Hamilton wasted no time jumping to an early lead in the second game of the day. Chris Collins led off the bottom of the first with a double. With one out Wolfsberg hit a double to center, but Collins had to stop at third. Haser did his job hitting a deep fly ball that allowed Collins to score. Amherst tied the game in the next frame. The Continentals continued the back and forth game. With two outs Rosenberg hit a triple, and then Morris came up clutch and drove him home with a single.  The next two innings were scoreless before Amherst tied the game in the top of the fifth. Finlay O’Hara ’17 started the game on the mound for Hamilton, allowing four earned runs over five innings. The game slipped out of control during the sixth and seventh innings for Hamilton. They allowed a dozen runs and found themselves down 14-2. The Continentals scored one run in the bottom of the seventh, but allowed two more in the final two innings. The final score was 16-3. Coach Byrnes summed up the series by saying it was, “heart breaking; with the loss on Saturday in game one, it was official that we were eliminated from NESCAC postseason contention, and that was a gut wrenching moment.  We had high hopes going into this spring season, with a veteran lineup loaded with experience and talent we really thought this was going to be our year to get over the NESCAC hump.”

While the Continentals can no longer make the playoffs, their season is far from over. This weekend they will host Williams in their final NESCAC series of the season. On Friday afternoon they play at 4 p.m., and on Saturday they play two games, the first starting at noon. When DePaoli was asked about the outlook on the final stretch of the season he said, “With all that the senior class has accomplished, and with the amazing impact they have had on this program, we’d like to send those guys out the right way and finish very strong.” On Tuesday they will play their final home game of the season against Utica College. While speaking with Coach Byrnes about the rest of the season he said, “We have plenty to keep playing for this year, but each remaining game and practice is preparation for our 2018 spring season.  There are a number of seniors chasing individual, class and program bench marks, we would like to make it three winning seasons in a row as well as help the 2017 seniors graduate as the most successful class in program history.”