Spooked ya! Hauntings on the Hill

Unlike, say, the admissions tours for accepted students that have been traversing campus in the past couple days, Wayne Gentile’s ghost tour poked at the dark underbelly of the College, with its dusty basements and darkened hallways, bumps in the night and things best left unexplained. 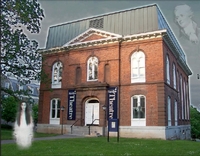 Last Tuesday night, a group of friends and I had the chance to take a ghost tour with Gentile, assistant director of Campus Safety. (My girlfriend, Kayla Safran ’13, won the tour in the ASB raffle.) A conscientious skeptic and consummate storyteller, Gentile is also a long-standing member of Hamilton’s Campus Safety, making him the perfect person to lead a ghost tour across the campus. As much as hard-partying students think they know about the campus at night, Campus Safety officers know more. For instance, one of the duties of officers working the late shift is doing walk-throughs of every building on campus. One of the toughest times of year is over winter break, when very few people are on campus. “It’s like a ghost town,” said Gentile, detailing the harrowing experience of going through some of the buildings on a windy night in late December. Given the obvious array of uncomfortable situations these men and women find themselves in, it is easy to see why Campus Safety officers are the de facto authorities on bumps in the night on campus.

Not all officers have experiences in the buildings (and not all of them tell), but they all have different ways of dealing with their uneasiness. Some avoid the building altogether; others check only the outside doors; some officers refuse to enter certain buildings without company. For each one of the buildings on the tour, Gentile explained, there is at least one officer reluctant to venture into it alone. So…what buildings are we talking about, you wonder? They are (in the order we visited them last  Tuesday night): the Molly Root Farmhouse, the Anderson-Connell Alumni Center (C&D), the Elihu Root House, Buttrick Hall, Root Hall and, the big Kahuna of Hamilton horror, Minor Theatre. The surprise absence in that list for most people is probably Couper Hall, which, with its out-of-place red brick exterior and somewhat ominous third-floor tower, looks like the obvious haunted building on campus—except that it’s not. So, forget that story you heard about the professor who hanged himself in that curious third-floor room; when we told him the story, Gentile shrugged and said that he had not heard of any experiences in Couper.

Like any truly great ghost tale, all of Gentile’s stories are drenched in both doubt and alarming specificity. When he cannot explain an experience, he takes care to add a grain of salt. Take, for example, the story of several telephones on the second floor of C&D going off simultaneously not just once but twice in the same night, while all along the light switch refused to work. “People call at weird times with time zones and everything,” offered Gentile. He had not, as of yet, devised an explanation for the lights. Selective in his stories, Gentile mostly tells stories for which he had at least one other witness. After all, a lot of what people see on their own—shadows, footsteps or strange noises—might just as easily be the product of the classic overactive imagination, as some kind of ghostly reality. Indeed, sometimes it seems as if the imagination swells to three or four times its size once you find yourself alone in a dark, silent room. Every pop and creak of settling or expanding wood sounds like a possible spirit, flickering through the walls. (“Again, these buildings are old,” pointed out Gentile.) Every shifting shadow indicated some sort of presence. But most of it was probably in my head.

The unforeseen pleasure of the tour was discovering aspects of the campus we never knew existed. For example, did you know that there is a kitchen fireplace and wine cellar in the basement of Elihu Root? What about the alarmingly shoddy floorboards of that third-floor Couper office (and its unparalleled view down the hill)? How about the big conference room in the second floor of Buttrick? And not only was there a thrill in seeing these places to begin with, but also in seeing them in the middle of the night, awash in shadows, the gurgle of pipes and the hum of sleeping electronics.

Overlooking the innumerable pops and creaks, our ghost hunt on Tuesday night, having canvassed the three Roots, C&D and Buttrick, was unsuccessful—until we reached Minor Theatre. Gentile had primed us for the jaunt with a grim story about a spiritualist visiting campus who, upon being brought into Minor Theatre, begged to leave the space, claiming that there were bad spirits inside who wanted to hurt him. Entering from the back of the building, we walked through the basement and up the stairs to little ghostly fanfare. However, once we stepped onto the main stage and settled into a quiet space, only a few seconds later, the banging began. It sounded like someone wearing oversized, almost metallic-sounding shoes, clomping across a small space somewhere above our heads. And then there was a loud bang. And then the footsteps started again. By the time we heard the second loud bang, we were ready to get out of there. Sure, it was probably pipes. Or someone playing an elaborate prank on a ghost-hunting group. But all of us heard something, and there were more than half a dozen of us. I would not be surprised if we ended up in one of Gentile’s stories.